The United States has a very high rate of oral health problems. For example, almost 50% of children have cavities by the time they reach age 5, and most adults have experienced cavities at least once. However, it’s not only tooth-related diseases at an all-time high in the country. Other parts of the mouth are affected as well, especially the gums.

The gums play a fundamental role in oral health, as they support the teeth and keep them in place. When the gums are affected by the disease, it can lead to tooth loss and other serious health problems. Gum disease is the leading cause of adult tooth loss in the United States. Moreover, according to the Centers for Disease Control and Prevention, over 60% of older adults have gum disease. This is one of the highest rates of gum disease in the world.

As stated earlier, gum disease is a serious problem among many Americans. But what causes it? Many factors can contribute to gum disease, including poor oral hygiene, smoking, and genetics. However, the most common cause of gum disease is plaque.

Plaque is a sticky film that forms on the teeth when bacteria mix with saliva and food particles. If plaque is not removed daily with proper brushing and flossing, it will harden into tartar.

Tartar is a substance that cannot be removed with regular brushing and flossing; it requires professional cleaning from your local dental office. Visiting the clinic can help reduce tartar buildup on the gums. Tartar buildup can lead to inflammation which can then lead to gum disease. Moreover, it can lead to stains and eventual tooth loss when not removed. 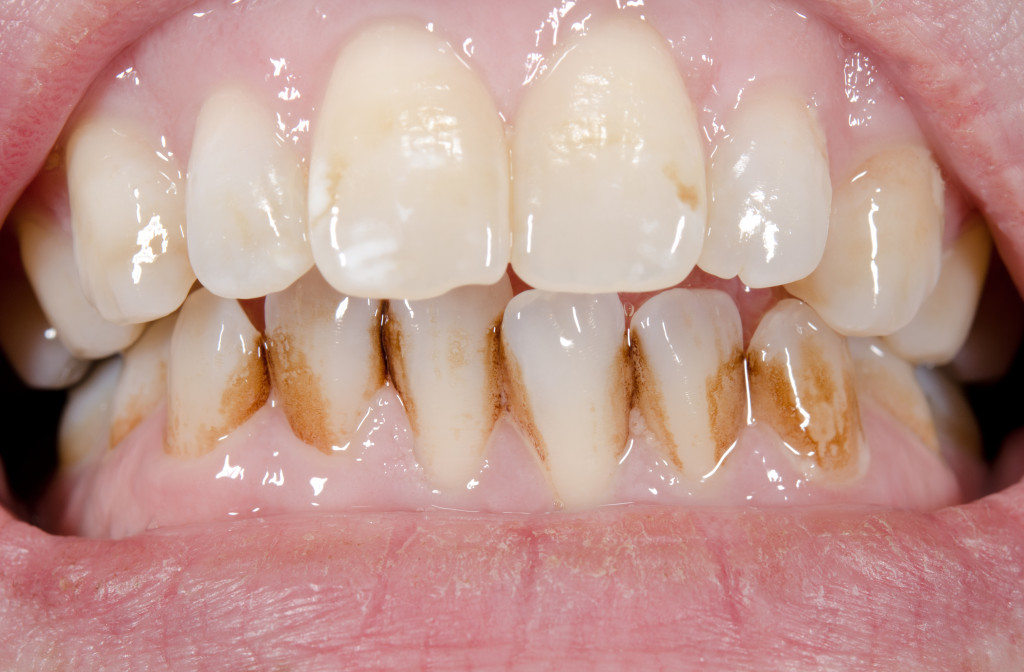 One of the most preventable causes of gum disease is poor oral hygiene. For example, if you don’t brush your teeth at least twice a day and floss daily, plaque will accumulate on your teeth and gums. This will lead to tartar buildup and eventually gum disease.

Smoking is another significant risk factor for gum disease. Smoking increases your risk of developing gum disease and makes the condition worse if you already have it. Cigarette smoke contains toxins that can damage the gums and cause inflammation.

Some people are more susceptible to gum disease than others due to their genes. For example, if your parents had gum disease, you are more likely to develop it.

Lastly, one of the main reasons for America’s high rate of gum disease is ignorance. People don’t know about gum or periodontal disease. The disease has been known to simply cure itself if it isn’t too severe, which can lead to the thinking that it’s just a minor disease. However, it can certainly be fatal if not treated early, as it can lead to oral cancer.

Now that you know the reasons for America’s high rate of gum disease, what can you do to prevent it?

Preventing gum disease can be a pretty simple undertaking. Practicing good oral health and reducing the consumption of sugary and acidic food and beverages is just one of them.

To prevent gum disease, it’s important to practice good oral health. This means brushing your teeth at least twice a day and flossing daily. However, you shouldn’t brush too much as it can do more harm than good. Brushing too hard can damage your gums and cause them to bleed. Moreover, it can make your teeth deteriorate faster. Brushing twice a day is a good quota for everyone.

Another way to reduce your risk of gum disease is to reduce the amount of sugary and acidic foods and beverages you consume. These types of foods and drinks can damage your teeth and gums, which makes you more susceptible to gum disease.

Reducing your sugary and acidic food intake can prevent not only gum disease but also diabetes! As stated earlier, diabetes can leave people susceptible to infections which can cause gum disease. You certainly don’t want to have both, as it can prevent you from recovering from the other.

If you smoke, one of the best things you can do for your oral health is to quit smoking. Cigarette smoke contains toxins and acid that can affect your teeth and gum. Additionally, nicotine can leave stains on your teeth that can’t be removed easily.

If you want to protect your teeth and gums from gum disease, it’s important to practice good oral hygiene, reduce your intake of sugary and acidic foods, and avoid diabetes. Additionally, you should also quit smoking if you want to improve your dental health. By doing these things, you can avoid periodontal disease.